Since Cassini’s arrival at Saturn, VIMS has recorded tens of thousands of cubes, containing tens of millions of spectra. This still increasing amount of observations precludes direct inspection of all data, either to select the observations, or to identify the occurrence and time variation of specific spectral or spatial features. Additionally, many VIMS observations are taken as a large number of cubes with small spatial extent, which cannot be meaningfully visualized without assembling mosaics. To deal with these difficulties, we developed titanbrowse. It comprises both a database of observations, and a visualization tool to inspect them. The database contains every VIMS observation of Titan in the PDS archive, and provides a flexible query system, which can select individual cubes or spatial pixels based on arbitrary functions of the instrumental or photometric data.

Once observations are selected, titanbrowse can be used to directly inspect them, through mosaics in several map projections, or displaying images of selected bands, or spectra of selected spatial pixels. This allows users to interactively explore the data, to refine queries to obtain those most useful to the intended analysis. The selected cubes or spectra can them be directly exported from the database, either to an IDL session, or to files (one possible format being the original cubes, in ISIS cube format). The cubes used in the database were processed to contain more geometric information than either the original PDS files or those that are produced by the VIMS pipeline, including the coordinates of the edges of each spatial pixel (necessary for precise mosaics), and more information on the illumination angles (to aid in analyses of specular reflections). This version is a complete reimplementation of it’s the previous, titan_browse, to overcome the previous coverage and performance limitations, and is the first to be made publicly available. An online version is under development.

The raw data used is publicly available at NASA’s Planetary Data System (PDS) Imaging Node. The cubes in the datasets are unprocessed, and before they can be incorporated into the database, they need radiometric and geometric calibration. For this purpose, a custom pipeline was developed, making use of the default pipeline software (included in the PDS datasets), and the data made available by NASA’s Navigation and Ancillary Information Facility (NAIF), incorporated through the use of NAIF’s SPICE library. The pipeline developed produces cubes with more geometric data than the standard pipeline, including:

The geometric data are incorporated into the cubes into their header (for data which are constant over the cube), and into backplanes (for data which vary for each pixel). The current implementation produces these 52 backplanes.

For the following backplanes, the data refer to the point nearest to the surface in the line of sight, of the pixel’s center (_0), top-left corner (_1), top-right corner (_2), bottom-right corner(_3), and bottom-left corner (_4):

The database was implemented in IDL, instead of a dedicated database system, for several reasons:

The database works on the principle of making selections of entire cubes or individual spectra (spatial pixels). Starting from a selection that comprises the entire domain, arbitrary user functions of the cube metadata (for cube selection) or pixel data (for pixel selection) are used to filter the selections, reducing them to the data with the selected properties. The data that can be used in functions for pixel selection include all core bands, and all (currently 52) backplanes. The data that can be used for cube selection includes the ranges of the core and backplane values, and (currently) the following metadata:

Internally, the database objects contain all the processed cubes, stored as a collection of objects of a class called pp_editablecube. This class provides a convenient way to read, edit, write and store ISIS cubes, allowing access (and modifications) to the entire contents of a cube (header, core bands, backplanes, sideplanes and bottomplanes) through an interface more complete and easier to use than any other routines that could be found. Cubes can be kept stored directly by these objects, and ISIS (.cub) files can be recreated with a simple call to one of their methods. No external libraries (such as ISIS) are needed to use the database or the cube objects.
For each PDS dataset, the database keeps its data in two files: one contains cube metadata, and all cubes as pp_editablecubes, thus in a “cube-major” order. For more efficient access during pixel selections, the second file used by the database contains the cube core and backplanes in a “band-major” order, so that only the needed bands get read from disk. This allows the database to handle every VIMS titan cube recorded, and conveniently provide query and access to them, without the need to have the original cube files.

Though the entire database was implement to be accessed programmatically, to aid in selection and visualization, titanbrowse includes a graphical interface. In addition to the functionality provided by the API, this GUI provides visualization of individual cubes and spectra, and geographical mapping of the selected pixels, to aid in interactive exploration of the data. As from the API, the selected data and metadata can be directly exported to variables to be used in the IDL session, or to cube and text files. 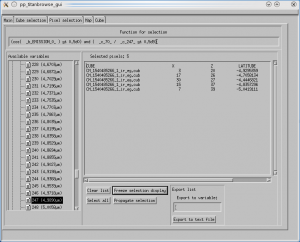 The cube selection panel, where the user builds arbitrary functions to perform queries over cubes. 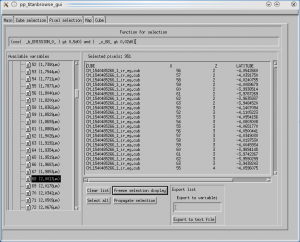 The pixel selection panel, where the user builds arbitrary functions to perform queries over pixels or to be evaluated and displayed on the map. 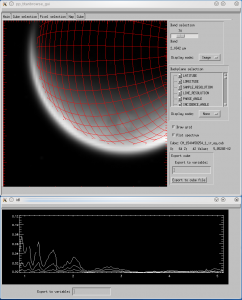 The visualization panel, where the user can see individual bands or individual spectra from specific cubes. 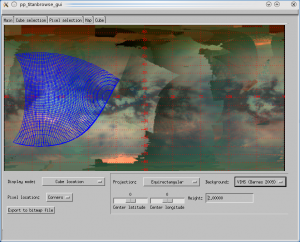 The map panel, where the user can see how selected pixels / cubes cover the surface, or map arbitrary functions of database variables on Titan’s surface 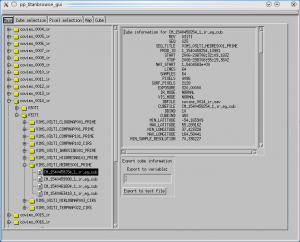 The cube browser panel, where the user can see metadata for all available cubes.

titanbrowse led to the discovery of the first tropical lake on Titan:

Possible tropical lakes on Titan from observations of dark terrain